A Spring in His Step?

Home » Insights » A Spring in His Step?

Last week in the midst of the turmoil of the Brexit voting frenzy the Chancellor updated the country on the state of the economy.  Having already asserted that any major tax changes would from now on only happen at the Autumn Budget we were relieved he stuck to his word and there were no unexpected surprises other than the suggestion of a ‘Brexit dividend’ which might arise if we can organise an orderly exit.

We had anticipated that the impending Office of Tax Simplification second report on Inheritance Tax might have been issued alongside the Spring Statement but no news on that yet.  We will keep you posted.

Largely hidden from sight by the political chaos surrounding Theresa May’s efforts to get Parliament (and her cabinet and party) to support her agreement with the EU, the Chancellor Philip Hammond’s Spring Statement aimed to set out the framework for tax and expenditure based upon economic forecasts prepared by the independent Office for Budget Responsibility (OBR) which critically assume that Parliament finally backs agrees an orderly exit from the EU.

On the same day, the government published the series of tariffs that the UK will apply to imports from the EU (see link to further info in footer) as well as elsewhere if the UK leaves without an agreement on 29th March.  Setting the tone for what may happen in the event of a deal or no deal scenario, the Chancellor referred to the ‘Brexit dividend’ that would be available to spend (again, assuming that Parliament agrees an orderly exit from the EU).

In reality, the national debt having ballooned during the great recession after the financial crisis, has now stabilised and years of tight purse strings have substantially reduced government borrowing as the chart below shows.  As a result. having inherited an empty cupboard from Labour in 2010, the Conservative government now risks handing back a Treasury that is well placed to loosen the purse strings. 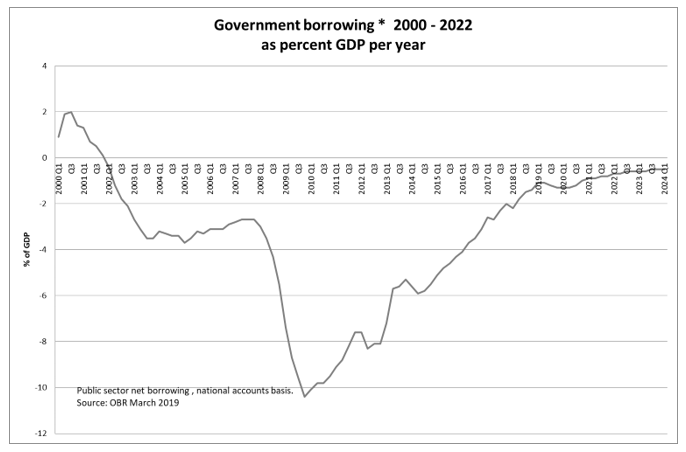 What about the wider global picture?

Against this seemingly positive backdrop but also lost from sight in the UK, there are signs that the global economic environment may becoming less helpful in mitigating the short term impact on the UK (and parts of the EU) of the Brexit vote.

This is how the Paris based OECD summarised its latest update to the world economic outlook, which was published earlier this month:

“The global expansion continues to lose momentum. Global growth is projected to ease… in 2019 and ..2020, with downside risks continuing to build. Growth has been revised downwards in almost all … economies, with particularly large revisions in the euro area in both 2019 and 2020. High policy uncertainty, ongoing trade tensions and a further erosion of business and consumer confidence are all contributing to the slowdown.”

Sceptics might say that economic forecasters appear again to be spotting a downturn when business data confirms that it has already started but separate detailed analysis (for example by the National Institute of Economic and Social Research) shows that the June 2016 Brexit referendum result has already had the negative impact that leading forecasters projected.

Although global prosperity initially helped shield the UK, almost two years after the vote economists calculate that the economy seems to be about 2% smaller than would previously have been expected. In addition, separate research from the London School of Economics has found that changes since the referendum in UK business investment abroad (which has recently been unusually high) and of foreign business investment in the UK (which has been unusually low) appear to confirm the UK is becoming a less attractive place to locate business.

Bank of England in a gloomy mood too

The most recent Bank of England survey of UK business conditions at the end of 2018 gave more evidence of gloomier conditions in the UK:

This provides an increasingly fragile economic and financial backdrop to the looming Brexit deadline and reinforces the incentive for firms and households to be cautious and to defer decisions that might readily have been taken in more typical times.

So with the threat of the passage getting stormier the risk of further surprises in the economy seems skewed towards disappointing news although whether Labour will get to raid the piggy bank is probably more important for the management of private wealth than the abruptness or otherwise of how the UK leaves (if it does) the EU.

Peter Stanyer is co-author with Professor Stephen Satchell of The Economist Guide to Investment Strategy, 4th edition, Profile Books, 2018.The views expressed are his own personal views, and do not constitute advice to buy, sell or hold any investment.

For long term investors our message is consistent – stick with the plan.  Portfolios are diversified globally and across asset classes and are designed to weather storms, which will pass.