So far in 2019, UK politics and much business planning have been consumed by the Brexit debacle … but this may be just the warm up act to an even more painful second half as we wait to see how the Conservative leadership battle plays out.

UK politics has been consumed by the Brexit debacle, which, depending on your point of view is either a national humiliation, or an indication of the strength of parliamentary democracy in preventing the UK government ratifying a withdrawal agreement that most MPs seem to regard (for different reasons) as profoundly disadvantageous to the UK.

For some more regulated sectors, the intended withdrawal from the EU has had a marked negative effect on business. The collapse of British Steel will have had many causes, but withdrawal from the EU will have compounded the harsh consequences of a very competitive global marketplace. British Steel provides a poignant reminder of the multiplier that must always be applied to gauge the overall impact on the economy of the failure of one firm, to take account of the loss of business for companies in its supply chains, and the withdrawal of expenditure by affected relatively well paid staff.

This though is a time of widespread labour shortages in the UK, Germany and in the US. As a result, there is a strong incentive for firms across the developed world to introduce labour saving new technologies.

The UK economy will continue to be buffeted by Brexit uncertainty and the potentially surprising short-term impact (first positive, then negative) of pre-cautionary stockpiling on the economy. But with Mrs May’s tenure now at an end, the volatility of UK politics seems likely to become more extreme rather than to calm down. A future historian, aware of whether Boris Johnson, or perhaps Jeremy Corbyn was about to become Prime Minister, might say to us today “you ain’t seen nothing yet.”

For much of the world, this is a bizarre side show. The consuming global issue is protectionism and President Trump’s determination to challenge the rise of China. This is different from the 20th century’s Cold War military rivalry between the US and the Soviet Union. The Soviet Union never threatened the technological superiority of the west, and this failure was probably it’s undoing. Soviets who could afford a car bought a Trabant or a Skoda or a Wartburg not because they didn’t want a Cadillac or a Jaguar or a Mercedes – they weren’t given the choice. But young Chinese already have a choice, and they might prefer to buy a Huawei phone because they think it is better and or cheaper than its Apple or Samsung competitors. So this is very different from the Soviet-US rivalry. China, in economic terms, is not going to go away.

President Trump understands the nature of this conflict. Whether he is right or misguided to try to restrict access to western markets of Chinese technology firms is a matter of opinion. But his actions, and the tariffs he has imposed will slow global growth and are likely to have unforeseen consequences. But so would regarding China as a friendly competitor in the global economy, which might be his characterisation of the stance of previous US administrations.

Not surprisingly, President Trump sees it as his role “to stand up to” this strategic challenger.

Nothing in this note should be taken as advice to buy, sell or hold any investment.  Peter is co-author with Professor Stephen Satchell of The Economist Guide to Investment Strategy (Profile Books /Public Affairs 4th edition, 2018).

In January we suggested 2018 had been unkind to investors, which it undoubtedly was. But with the first part of 2018 ‘dropping off the page’ (for yearly return figures), and an improved position since January 2019, the position has reversed.

Improved investor sentiment has been attributed to the apparent likelihood that the US Federal Reserve may stop raising interest rates; and to a perceived thawing in relations between the US and China although Trumps subsequent introduction of further tariffs signifies a tougher stance. 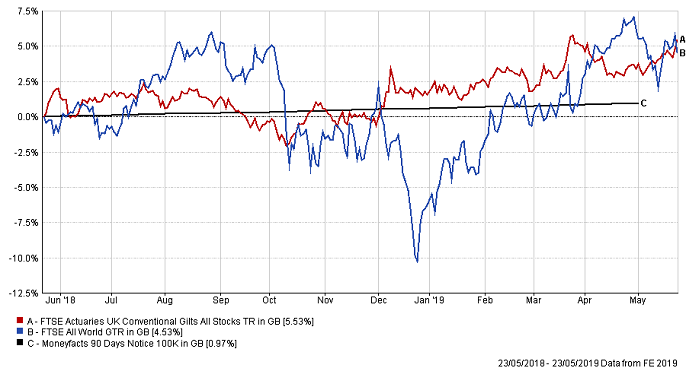 Over twelve months we can see the recent recovery in its broader context. The increased volatility of stock markets (shown here in blue) is in fact much closer to ‘normal’ historical levels, and with political and economic uncertainty remaining high investors should reasonably expect this to continue.

We don’t know, and can’t control, what will happen next but what we can do is make sure you maintain adequate short term cash reserves and that your investment strategy is risk appropriate and broadly diversified across asset classes, geographical regions and sectors.  Our experience shows that this is what gives you the best chance of meeting your goals.

If you have any concerns or would like more detailed analysis of your portfolio then please do get in touch. As always, we welcome your feedback so we can improve our communications to you.

Past performance is no guarantee of future returns and your investments can go down as well as up in value and you may get back less than you put in.  The returns shown in the charts are before tax and costs, while investors must pay both.